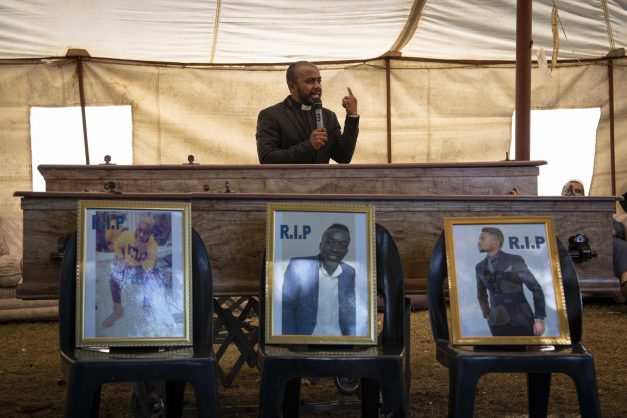 The deaths of three young men could have been avoided, say the small Congolese community in Zeerust.

A fire was carefully and steadily kept alive in the front yard of the house where the Kahindo family live in Smook Street in Zeerust, in the North West province. The fire burned for 12 days to signal that a family and community were in mourning. But this past Sunday, as three young Congolese men were laid to rest in a nearby cemetery in the middle of the sleepy suburbs of this small town, the fire was finally put out.

Bernard Sadiki, 27, Elias Moise Kahindo, 26, and Jafari Fiston Binyongo, 20, were buried on Sunday after they died in a car accident nearly two weeks ago. The small Congolese community in Zeerust and those who had travelled from across the country to be at the funeral gathered at the house from Friday afternoon, feeling shock, anger and sadness. 16 February 2019: The fire lit after the deaths of the three young Congolese men. It would continue to burn until the day of their burial. Picture: Daylin Paul.

Congolese minister and local community leader Pastor Christian Musambo Papy held prayer sessions under the white marquee in the yard, but the sentiment among those in attendance was the same – these deaths could have been avoided.

Sadiki, Kahindo and Binyongo were part of a group of people who had accompanied a friend, Amoirite Mateso, 26, to the Zeerust Hospital after she fell sick on Tuesday 5 February. When they arrived at the hospital, nurses examined Mateso, took her vital signs and told her to wait for a doctor. When the doctor arrived, he apparently refused to treat her and instead told her to go to another clinic for a referral letter.

Papy said the clinic was closed and that the doctor should have known this as it was after hours. The group of men accompanying Mateso insisted she be treated at Zeerust Hospital.

The pastor said it was at this point that the doctor became agitated and aggressive, telling Mateso and those with her that he would not be told what to do by ‘kwerekwere’ (a derogatory term used to describe African migrants) and that he wouldn’t treat a ‘kwerekwere’. 16 February 2019: Amoirite Mateso, who was denied treatment at Zeerust Hospital, blames herself for the deaths of the three men who tried to help her. Picture: Daylin Paul.

Fearing that Mateso’s condition might worsen, Sadiki, Binyongo, Kahindo and the others in the group jumped into their cars to take her to Lehurutshe Hospital, roughly 20km north of Zeerust.

It was on their way to this hospital that the three young men crashed their car on the N4 highway. They died at the scene, with remnants of the wreck still visible on the side of the road almost two weeks later.

Mateso found out about the accident and the deaths of the three men only the following day, after her discharge from hospital. The night before the funeral, she spoke softly through an interpreter as she sat slumped in her chair, blaming herself for their deaths.

“I am in more pain now. Because of my life and them trying to fight for my life, they died. I blame myself and I blame the doctor, because if he had helped me they would not have died,” she said, her eyes brimming with tears.

She claimed she was left confused after the doctor refused to treat her and told her to go to another hospital, yet people who arrived at the hospital after her were treated without referral letters.

On the day of the funeral, women from the community stayed with Mateso. She did not travel with Papy and the group of family and friends – mostly men – who took the three coffins to the accident site. Here, they carried the coffins from the hearses one at a time and prayed for each of the men. 17 February 2019: Kashindi Kahindo, Elias Moise Kahindo’s brother, struggled to keep his emotions in check during the funeral service. Congolese from across South Africa came to pay their respects to the three men being buried. Picture: Daylin Paul.

‘This could have been avoided’

Kiza Pascal Binyongo, 25, remained stoic throughout the funeral service, barely showing any emotion during the long sermon and burial of his brother. But he spoke with intensity about the loss of his brother days earlier.

Sitting on a chair in the yard where the funeral service took place, he leaned forward, with his elbows resting on his knees. “This could have been avoided. I am very angry,” he said.

Speaking slowly and softly, with his eyes cast down and his fingers intertwined, he continued: “This is very painful. I feel bad and I feel discriminated against. If you choose to be a humanitarian, if you choose to become a doctor to help people, how do you refuse to treat people?”

Like Binyongo, Lucas Kenge Sadiki, 34, lost his younger brother in the accident. He spoke softly in short, abrupt sentences. “It was very, very sad. This boy was strong and healthy. He had a bright future.”

Sadiki, who was separated from his parents when he and his brother fled the Democratic Republic of the Congo and has yet to track them down, described his situation as “hard” and “very painful”. Papy, who conducted the church service during the burial, was instrumental in bringing the Zeerust Hospital doctor’s ill treatment of Mateso to the attention of Ramotshere Moiloa local municipality mayor Kereng Mothoagae, a qualified nurse.

“It is very, very sad. It should be investigated because it can be repeated. People are now canvassing for elections and you cannot canvas with people’s lives. Somebody was sick and people died,” she said.

“People were ill-treated because of xenophobia. So it must be investigated. That doctor must come and he must account … I don’t think he was supposed to go that far. If people bring someone who is sick, he should have treated them, not just throw them out of the hospital. You don’t do that,” Mothoagae said.

Despite being critical of the incident, Mothoagae’s tenure as mayor has not been easy. In August last year, residents led by a disgruntled former municipal employee established a group called the Enough is Enough Movement, which rallied locals against the small Congolese community in Zeerust, claiming they were selling drugs. 17 February 2019: Congolese mourners came from all over South Africa for the funeral and burial of the three men. Here, their coffins are lowered into the ground at Zeerust Cemetery. Picture: Daylin Paul.

The SABC reported that the movement’s chairperson, former municipal manager Crosby Maema, said: “We came to realise that this issue is bigger than we thought. So, as the community, we do not want to be seen as or sound xenophobic to the foreign nationals. They are our compatriots. [But] if they sell drugs, we will not allow and accommodate them within our society … Zeerust in particular.”

Papy said the Enough is Enough Movement mobilised a group of around 200 people to target the homes of Congolese migrants, including Papy. He woke up one night in August to a mob carrying weapons standing outside his door. “They had pangas, knives and other weapons. They wanted to look in the house. My Bible was on the table and by the grace of God, I survived.”

Papy said he was angered that a group of people carrying weapons could enter his house, with his wife and three children inside. He added that some of the people who stormed and ransacked his house were members of his congregation, who later phoned him and apologised for their behaviour. “Zeerust was a good place for us. Now, I don’t know what to say. I’m not sure anymore.” 17 February 2019: Pastor Christian Musambo Papy, who is also a leader among the small Congolese community in Zeerust, delivering his sermon during the funeral. Picture: Daylin Paul.

Shauri Jonathan Mwenemwitu, the local leader for the Congolese Solidarity Campaign, said the mob harassed the Congolese community to such an extent that many families took cover on a nearby mountain for three nights, fearing they would be attacked in their homes.

“The group of people will come around 10pm or 11pm. They will knock at the door, they’ll beat you and tell you ‘This is not your country, you should go back to your country’,” Mwenemwitu said of the event.

Mwenemwitu said residents beat and put a tire around the neck of Kahindo, who was buried this past weekend, during the xenophobic attacks in August, before police and security guards rescued him. The police were not able to confirm this. Following the attacks, he said, two Congolese families decided to go back to the DRC. “Even now, I am thinking of going back home … I’m thinking it is better to go back home. To be honest, I am done. I am tired with South Africa. I don’t have a choice, I have to,” said Mwenemwitu, who has been living in Zeerust for more that 10 years. “When I speak to my parents they say ‘Please my son, come here, I don’t want those people to kill you. It is better to die here’.”

About the Enough is Enough march last year, North West provincial police spokesperson Brigadier Sabata Mokgwabone called on the Congolese community to report any attacks on them. “We can confirm that a march was organised by the local community to raise concern about crime in the area including some foreign nationals (sic),” he said.

“Although there [are] allegations of attacks against Congolese, we are not aware about allegations of necklace. Congolese were also requested to lay charges so that investigations could be done but they seemed to be reluctant. Some of them allegedly ran to the mountain.”

Mokgwabone said peace had been restored between the disgruntled locals and the Congolese migrants following police, civil society and political intervention. “At this stage and since after the march, the situation has been normal,” he said. 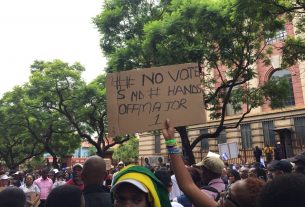 ‘He is innocent’, – Bushiri’s supporters believe he will be set free 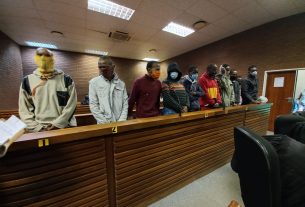 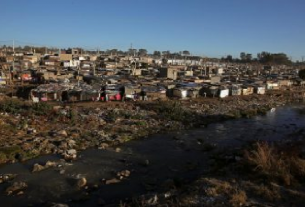 Foreign nationals evicted from their homes in Alex